The R&A and USGA ‘Official Guide to the Rules of Golf 2019‘ is now available in a Flexi-bound hard-copy from Amazon.co.uk

Contains everything you need to know, including ‘Interpretations’, (which was the old ‘Decisions’) and ‘Committee Procedures’

If you do not wish to possess a Hard-copy then the Mobile Apps for iOS or Android devices are excellent, and can be downloaded from here.

The R&A and the USGA have announced many changes to the Rules of Golf to come into effect on 1 January 2019.

They represent the most substantial Rules overhaul since 1984. Because of the amount of reform, this modernisation of the Rules of Golf is likely to require at least some degree of change by every Golf Club.

I will consider the categories of information that I think golf clubs should be considering to ensure they are 2019 Rules-ready and would encourage the appropriate person or committee within a club to consider this information as a part of their planning for the transition to the new Rules. I hope to provide further information and updates between now and 1st January 2019 as it becomes available.

Matters for a club to consider or be aware of are:

The R&A “Committee Toolkit” feature will include a Local Rules “creator” which will allow committees to select the Model Local Rules they need to create the Local Rules sheet for their course and to pass on to their score card printer. [The R&A advised this would be at least partially functional by the week of 10-14 September.2

2. Whether to use the new stroke-and-distance local rule

More detailed guidance on the new stroke-and-distance Local Rule will be available upon the release of the Committee Procedures resource.

3. Whether to mark any new ‘penalty areas’

4. Whether to bring in a local rule permitting lateral relief on opposite side of penalty area

When considering a Local Rule to allow additional relief:

5. Whether to bring into effect a Code of Conduct for on-course activity with penalties that apply to a player’s competition score

6. Whether to bring in a Pace of Play Policy

7. New permission under the Rules to officially return scores digitally.

I hope this advice is of some help.

Now we all know how frustrating a slow round of golf can be and are always ready to blame players or a group in front of us, but player behaviour may not always be the reason for Slow Play.

The R&A and USGA are championing the use of Ready Golf in order to deter Slow Play and many Golf Clubs are following their recommendation in the misguided belief that it will encourage golfers to play more frequently, attract more individuals to play golf and overnight turn round their falling revenues.

I do not see how the R&A and USGA can promote this action when their own findings from their Pace of Play Global Survey (2015) clearly demonstrated that Player behaviour did not play a major part in increasing the  time to play a round of golf.

Meaning that Player Behaviour was not a major factor in increasing the Pace of Play of a round of golf.

What the R&A and USGA did find from their Global Survey, and I do not know why they are not asking Clubs to put these issues to the top of a Pace of Play agenda was that the three major factors affecting Pace of Play were:

Many policies that Golf Clubs have already in place create a slow pace of play even before a golfer has teed up his/her ball on the first tee.

Surely Clubs must be encouraged to address these issues if they want to thrive and improve revenues, rather than covering them up by blaming player behaviour for the problem – which Ready Golf only emphasises.

Ready Golf as it is being introduced at the moment, like the previous ‘keep up with the group in front’, will not work alone.

To have any effect it will require marshalling, which is expensive both in time and manpower and the need to have a strict pace of Play Policy in place so that players, both members and visitors, know what is expected of them out on the course or in a competition. 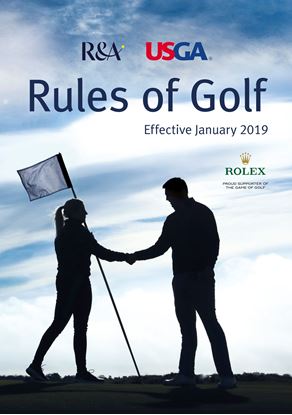 The Player’s version will be in all Golf Clubs soon and will be available to order from the R&A Shop on 1st October 2018.

Meanwhile, you can read an online version of both publications if you click on the link below

Well just what we all have been waiting for,

The R&A and USGA have now released the Final edition of the New Rules of Golf 2019.

Well looks like a lot more golf is being played now the better weather is with us, I am receiving more questions onRules of Golf and Handicapping.

This post will deal with the query ‘May a player lift his/her ball in the rough in order to identify it?’

The answer is yes provided you follow the procedure set out in the current Rules of Golf, 12-2, and that is:

Failure to comply wth all or any part of this procedure, or the ball is liftedto identify it without good reason to do so, the player incurs a penalty of one stroke, both in Match Play and Stroke Play. If the ball is the player’s ball, s/he must replace it, if s/he fails to do so s/he incurs the general penalty of Loss of Hole in Match Play or Two Strokes in Stroke Play.

Lifting also encompasses ‘rolling/rotating the ball’, which many amateurs do.

NOTE: In the New Rules of Golf 2019, Rule 7.3, a player will not have to announce her/his intention to lift a ball for identification. The act of rotating the ball, instead,  is also mentioned specifically

In Match Play a player may overlook her/his opponent’s  infringement to this rule if s/he wishes, feeling that the opponent has not gained any significant advantage by doing so.

This last point can apply to most rules during Match Play, provided players have not agreed beforehand on actions they will take over certain rules or do not agree to waiver any Rule of Golf.

Proposed Changes to the Rules of Golf Definitions 2019

The R&A and USGA Chart below introduces these changes and divides them into :-

Please click on Proposed Changes in Definitions 2019 to view these charts.

I will be concentrating on the new Rules in future posts and Newsletters, but first I will mention what will not be markedly changing.

The R&A and USGA,in March 2018, published a draft of their proposed changes to the Rules of Golf, these will be confirmed in print in July 2018 with the other publications, Players’ Handbook and ‘Decisions Book’ due in September 2018.

The objective in modernising the Rules  of Golf is to ensure that they can be:

To this end the R&A and USGA have recognised that, in order to preserve the essential character of the game, some rules will be retained. These are:

My next post will deal with the changes in the Rules of Golf Definitions.

You can read this by clicking on the link below

The R&A and USGA have recommended that all Committees introduce the following Local Rule commencing 1st January 2018.j

This Local Rule overrides the change to the Exception to Rule 6-6d introduced on 1st January 2016, which penalised a player an additional two strokes for a penalty that was not recorded on their returned score card.

The Exception to Rule 6-6d is modified as follows:

Exception: If a competitor returns a score for any hole lower than actually taken due to failure to include one or more penalty strokes that, before returning his score card, he did not know he had incurred, he is not disqualified. In such circumstances, the competitor incurs the penalty prescribed by the applicable Rule, but there is no additional penalty for a breach of Rule 6-6d. This Exception does not apply when the applicable penalty is disqualification from the competition.

Note 1: The Committee is responsible for the addition of scores and application of the handicap recorded on the score card – see Rule 33-5.
Note 2: In four-ball stroke play, see also Rule 31-3 and 31-7a.

So if this Local Rule is introduced, a player will only be penalised one or two strokes (depending on the penalty for the breach incurred), for not including a penalty on their score card, providing they were not aware that they had incurred one.